Oligomycin- Introduction and Mechanism of Action

Oligomycin is a group of Streptomyces macrolides that bind to the Oligomycin sensitivity-conferring protein (OSCP) at the F(o) subunits 6 and 9 which are found in the stalk of the F1F0-ATPase complex. This binding blocks proton conductance across the synthase complex and inhibits the synthesis of mitochondrial ATP. As an additional result, the proton pumps of the electron transport chain are unable to operate because the gradient becomes too strong for them to overcome. NADH is then no longer oxidized and the citric acid cycle ceases to operate because the NAD+ concentrationfalls below the concentration that these enzymes can use.1,2

The Oligomycin complex was first reported in 1954, isolated from a strain of Streptomyces diastatochromogenes.3 Oligomycin have been attributed antifungal,4 antitumor,5,6 immunosuppresive,7 and insecticidal and nematocidal8 properties. There are several known Oligomycins, named Oligomycin A-G. Different Oligomycin isomers are highly specific for the disruption of mitochondrial metabolism. Oligomycin A, a dominant analog of the isomers, is an inhibitor of mitochondrial F1F0 ATP synthase that induces apoptosis in a variety of cell types (average GI50 = 270 nM).9-11 Oligomycin A specifically exhibits antifungal, antitumor, and nematocidal activities, but has poor solubility in water and other biocompatible solvents, which limits its clinical application.12 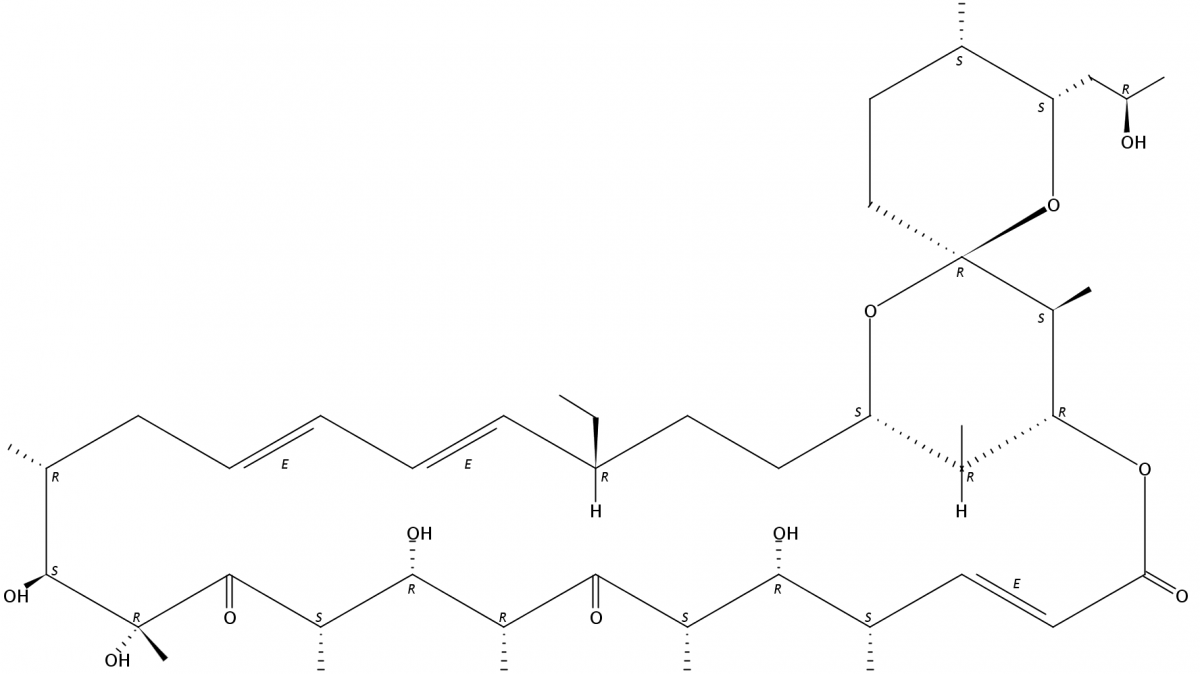 In 2001, Oligomycin A was labeled among the top 0.1% most cell line selective cytotoxic agent from 37,000 molecules tested against the National Cancer Institute (NCI) panel of 60 human cancer cell lines, with ∼35% of cell lines exquisitely sensitive (GI50 10 nM) and the remaining less sensitive (GI50 1-10 μM).13 In 2004 an Oligomycin was described as an inhibitor of the multidrug resistance efflux pump P-glycoprotein (P-gp).14 In 2016, Salim et al. studied an Oligomycin class of Streptomyces polyketides as inhibitors of oncogenic mutant K-Ras plasma membrane localization, thus are putative cancer chemotherapeutics.15
The Oligomycins are stable compounds. Their inhibitory potency is little changed on storage at pH 3 to 10 at 37°C for 54 h. As mentioned, they are almost insoluble in water but are soluble in water-miscible solvents such as ethanol, methanol, dimethyl sulfoxide, dimethylformamide acetone, glacial acetic acid and ether. Oligomycins are usually dissolved in ethanol and stored in a refrigerator. Their maximum solubility in ethanol seems to be not more than 10 mM (about 8 mg/ml).16

Oligomycin A has been studied for the ability to induce different types of cell death.17 Tettamanti at al. induced oncosis in the IPLB-LdFB insect cell line by using Oligomycin A, by observation of a time-dependent reduction in ATP concentration from 2 h to 24 h. The oncotic pattern occurs after a 22 h incubation with Oligomycin A and is followed by a necrotic phenotype.

Since Oligomycin blocks oxidative phosphorylation, it makes cells more dependent on glycolysis and more sensitive to inhibitors of glycolysis such as 2-deoxy-D-glucose.18 Cells that are deficient in HIF-1 α, which induces increased glucose uptake and glycolysis, are more sensitive to the toxicity of Oligomycin whereas cells that are sufficient in HIF-1α are less sensitive to Oligomycin under hypoxic conditions (where HIF-1α accumulates). However, because Oligomycin blocks reduction of O2 by the electron transport, it maintains higher levels of O2 and modulates down the protective effect of HIF-1α under normoxic conditions.19-21 As a consequence of Oligomycin effects, higher eukaryotic cells may develop serious syndromes, including neurological disorders, that may degenerate into life-threatening diseases. Thus, Oligomycins are not suitable for therapeutic applications.

To summarize, the Oligomycin group may serve as an antibiotic, yet the mechanism of action may affect healthy cells as well, and it is not used therapeutically.  Oligomycin A is used to modulate ATP synthesis in studies of cell or organ function. Administering Oligomycin to an individual may result in high elevation of lactate level accumulating in the blood and urine.